In this guide, we will cover all the different ships in the Celebrity Cruises fleet and how they compare to each other.

Celebrity Cruises was actually founded in 1988 in Greece, by the shipping company Chandris Group. Originally they were conducting upmarket cruises to Bermuda.

In 1997, Royal Caribbean International acquired Celebrity Cruises and during the same year, the five ships became six with the addition of Celebrity Mercury.

By 2000, the start of the brand new fleet was beginning to arrive – this was the Millennium Class ships, which began with Celebrity Millennium in 2000 and was followed by three additional ships (Celebrity Infinity, Celebrity Summit and Celebrity Constellation).

After that, Celebrity created the Solstice-class, which consisted of five ships. These proved extremely popular and Celebrity actually went back and ‘Solsticized’ the rest of their fleet to bring the other ships up to the same passenger experience.

In 2018, Celebrity Edge debuted with a non-traditional cruise ship bow (a Parabolic Ultra-Bow, if you may!) and The Magic Carpet (an open-air dining experience attached to the side of the ship that can move from the bottom to the top of the ship if needed and act as a platform during tender operations)

Celebrity Beyond is the newest Celebrity Cruises’ ship – she joined the fleet in April 2022.

Captain Kate McCue is currently on Celebrity Beyond as Master of the ship.

Celebrity Eclipse, Celebrity Solstice and Celebrity Millennium all sail in the Alaska region.

Celebrity Xploration is the smallest ship of the fleet at 319 GRT and carrying just 16 passengers. This ship is part of their Xpedition-class ships.

Celebrity Millennium is the oldest ship in the Celebrity Cruises fleet. She joined the fleet in 2000.

Celebrity Cruises is a Royal Caribbean brand, having been acquired by them in 1997 from the Greek-owned Chandris Group.

Celebrity Edge has a Parabolic ultra bow. A curved rather than pointed bow that actually encapsulates the traditional bulbous bow as seen on ships usually. It offers a 20% greater energy efficiency.

Celebrity Cruises Ships by Size (from largest to smallest)

Celebrity Cruises Ships by Age (from newest to oldest)

Just two of the Celebrity’s ships were built and owned by other cruise lines before being acquired by Celebrity Cruises.

Both of these are quite different ships from your usual cruise ships, they are expedition ships. This means they are much smaller and have very different passenger and operational needs because they operate in much shallower, confined waters and must adhere to even stricter environmental laws in these regions.

Celebrity Cruises Ships by Class (from newest to oldest)

What is the difference between the Edge-class ships?

Celebrity Edge and Celebrity Apex are both identical ships. However, Celebrity Beyond is an extra 20 meters longer and has one additional deck. This brings 179 more suites and staterooms to the ship, a bigger (40%) sundeck at The Retreat and the Sunset Bar is 180% larger.

Celebrity Ascent is due to match Celebrity Beyond in terms of size and capacity.

What is the difference between the Xpedition-class ships?

The three Xpedition-class ships that Celebrity Cruises own are all custom-built ships, with Celebrity Xploration previously operating as Athala II for Ocean Adventures.

Celebrity Flora is the newest of the Xpedition-class and offers just forty suites – all of which have a private balcony. The ship has six decks and has a max cruising speed of just 12 knots.

Celebrity Cruises are known for its stylish cruise ships and fantastic service. A more premium version of parent company Royal Caribbean’s offerings some would say, Celebrity aim to make cruising trendy for those who would never consider cruising.

Their Edge-class ships, with famous designers and celebrity tie-ins, aim to break to entice those that enjoy luxury hotels and travel but are yet to experience a cruise and those that like both!

If you enjoyed this article you may like our other articles that compare MSC Cruises, Royal Caribbean, Holland America Line and Cunard Line ships. 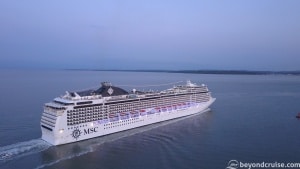