Today we are due into Rotterdam – at some point. The weather is absolutely crazy out there, and the ship is rolling, pitching, and there is lots of banging going on – I love this, but I am sure there are many fellow passengers wishing it would stop right now!

We are scheduled to arrive at our berth in the city by 8 am.

I was awoken at just after 5 am by some loud crashing noises and the ship jolting around considerably more than when I went to sleep. Being a geek an expert at knowing maritime stuff, I looked at the navigation app I have and noticed we were now slowly turning around at about 6 knots (7 mph). We were now against the swell of the sea and winds at a very slow speed – so getting the full brunt of the bad weather against the side of the ship during our change of course.

It subsided after about five or ten minutes, but then the very loud noise of a helicopter replaced the uncomfortable movement of the ship. I hadn’t heard any crew calls, so it was unlikely to be a medical emergency.

I crept out onto my balcony – it was really windy, cold and wet – and snapped one photo of the helicopter (which, by chance, the timing was perfect) – what looked like a Lego man was being delivered to the ship!

Because the sea conditions were so rough, the pilot for the Port of Rotterdam was unable to board via the usual conventional means (of the pilot boat) and instead was being winched from a helicopter to the ship instead!

After a few minutes, he must have landed safely on deck as the helicopter passed over us and back towards land.

About an hour later, we were finally on the main channel sailing into Rotterdam.

Rotterdam is the largest seaport in Europe, and for over forty years (only ending in 2004), it was actually the world’s busiest seaport in terms of cargo. Today, shipments to the port get distributed to over 50 million people across the European region.

It is one of the world’s largest natural deep-water ports (at a draft of about 24 metres), which means cruise ships can sail right into the city with relative ease (length is more of an issue these days for turning around!)

Unlike sailing into Amsterdam, where ships must pass through the North Sea Locks at IJmuiden, ships can sail relatively freely into the city. That is only when the Maeslantkering (‘Maeslant barrier’) a storm surge barrier is open, of course.

The distance between the North Sea and Rotterdam’s City Cruise Terminal is approximately 25 miles – it takes around two hours to sail in and berth alongside.

The scenery on the way in (or out) is worth getting up early for or having a late dinner – the port itself is made up of five different areas. There are refineries, container transportation hubs, and of course, the city with its area for cruise ships to dock.

and these inter-coastal container ships

There are also some huge buildings here – like really huge.

Some are hotels, others are headquarters for large accounting firms, and there are also many residential buildings here (or even a mixture of all three within some of the buildings) – it is a great visual city.

After room service breakfast and watching us slowly pull alongside the quayside in the city of Rotterdam (at 8.30, just a little later than expected), I decided to get ready and head out and explore.

You head to the specific disembarkation Deck of the ship (Deck 6 ‘Diamante Deck’ in this case) and the gangway. A quick swipe of your cruise card as usual, and you are off the ship.

The terminal building is pretty big (though smaller than the one at Hamburg), and there was a table set up with someone handing out free city guide maps.

There is a shuttle bus, but unfortunately, there were no signs when I exited the terminal – so I can’t tell you exactly where to get it from (ask someone), and I am not sure where it drops you!

There are taxis just outside the terminal building though if you want to hop in one of those and go somewhere instead of walking.

That said, the city is within a fairly easily walkable distance I found. You cross over the Erasmusbrug bridge and carry on one block, take a left, and you start heading into Rotterdam Centrum.

Crossing the Erasmusbrug Bridge, you can get some great views of the city skyline and of course, the ship you have sailed in on!

At the end of the bridge, about one block left, is the Maritime Museum. I didn’t go this time. It is 16 EUR for Adults and 12 EUR for children though (open Tuesday – Sundays)

There are some shops nearby too, though not all family-friendly – but at least clearly signposted (!)

When I got into the main part of Rotterdam, there was a lot of familiarity here.. McDonald’s (two within 150m), Primark, Specsavers and even Holland & Barrett.

Well, I didn’t come to Rotterdam to visit shops I can easily visit in the UK – so I passed by all of those and looked for some independent retailers/hospitality shops instead.

Like this cheese shop – which you can actually smell before you see it (in a good way!)

Further down the street is this small coffee bar which offers fresh waffles and outdoor seating. It is really nicely designed inside, and I had a brief talk with the owner (he’d love your support if you are visiting the city – the prices are good too!)

Just two doors down and on the opposite side of the street is this custom jewellery shop where they handmake jewellery literally in the back of the shop – I love their displays!

There is plenty to seek out in Rotterdam, but you do need to go walking around to make sure you see everything – make sure you pick up a map in the terminal (or bring one with you!)

There are plenty of local small bars if you fancy a beer too.

One thing you need to be careful of in the Netherlands is crossing the road. They do have a ‘green man’ with a countdown (audible too) to let you cross – but they don’t make it clear that the green man is generally only saying it is safe to cross the car part of the road!

You will find in Rotterdam, most large roads have a design that consists of from one side to another of:

Make sure you look both ways repeatedly as you cross over – with electric cars and mopeds, too, you don’t even hear them coming. I saw a few pedestrians nearly get taken out today!

I headed back to the ship over the Erasmusbrug bridge, and all the traffic (of which there are pedestrians, cyclists, mopeds, cars AND trams) was held up at one end whilst a huge section of the bridge was lifted up and underneath a floating barge with a crane on it passed through the gap and alongside MSC Preziosa.

After about 10-15 minutes, the bridge eventually returned to its normal position, and everyone continued on their way.

A quick right at the end of the bridge allowed me to walk right alongside the bow of MSC Preziosa and look at how huge she really is. The photo doesn’t do her justice!

It was then time to embark the ship again. The terminal building has two queues for the security machines. After causing a small issue with one of the machines, which required four security guards to open the machine up and retrieve my cruise card *ahem* – I was on my way to rejoining the ship.

After only having a coffee, a waffle, and a beer (at one of the local bars mentioned earlier) – it was time for some food.

Before the buffet, I took a walk along the top deck of the ship to catch the sunset, and I also noticed all the excursion coaches had now just arrived too.

I headed up to the Maya buffet on Deck 14 (‘Smeraldo Deck’) and grabbed a slice of pizza – there were six different types on offer today. I just picked Margherita as I wasn’t wanting to get too full as I am going to a Speciality Restaurant on the ship tonight.

There were lots to choose from in the buffet, and in the end, I ended up picking some mini desserts (for the first time this trip) from one of the many counters.

There are lots of these to choose from, and they are available pretty much all day (and evening).

I choose a mini coffee eclair, mint jelly and a lemon cake. My first buffet desserts of the trip!

This evening I decided I would try out one of the ship’s Speciality Restaurants. These are not included in your cruise fare, but you can buy a dining package that allows you to eat at one or two of these restaurants during your voyage, or you can pay as you go if you prefer.

Butcher’s Cut is a steak restaurant which is rolling out across the MSC fleet – it has been on all new builds since 2017, and many of the other ships either have it or are getting it during their drydock schedules.

On MSC Preziosa it is located on Deck 7 (‘Rubino Deck’) towards the rear of the ship on the port side.

You can buy the Dining Experience before you sail (saving you 15% service charge), and then when you board, you arrange which night/time you want to dine there.

There is a huge menu to choose from and if you have prebought the package or you are a Diamond MSC Voyager member, you actually get to eat in here free once per voyage (you can only choose from the ‘Dining Experience’ part of the menu).

I redeemed my free meal, but if you wanted anything exchanged (the free starter for a paid one, for example), then you would pay 50% of that food item price on the menu.

I was also told that as I have the Premium Drinks package, I was allowed to pick any of the drinks they offer up to the usual 13 EUR per drink price. Any other drinks I wanted above could be ordered but would cost the full price.

Not really a problem, though, as the drinks menu is extensive, and they will get you a cocktail if you are happy to wait (as they go to one of the main bars for you)

For my starter, I had the Caviar because it is so good in here from previous Butcher’s Cut experiences.

I then had a smaller portion of the Hearts of Palm

This was followed by the Filet Mignon (8oz), with fries and onion rings as sides and a selection of sauces.

I didn’t order dessert on this occasion as I was too full – but perhaps I will return? (they make an amazing Lava Cake)

After dinner, I decided to return to my cabin and read for a bit. We are back out of the Port of Rotterdam now and into the North Sea – we have just 90 nautical miles to travel tonight (Tip: if you are going to miss the ship by accident and have to get to the next port yourself – this would be your easiest for sure!)

Tomorrow I have not decided whether I will head into Bruges or stay on the ship – there are lots still to look at and do onboard, and we only have two days left – this week has flown by!

Catch up with you tomorrow! 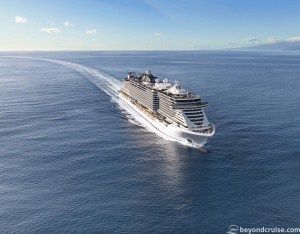 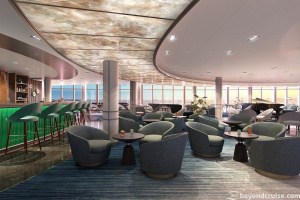 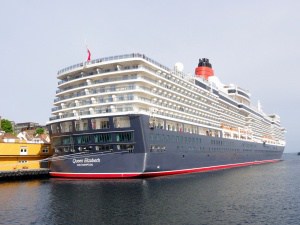 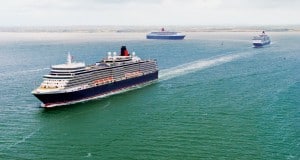