This morning we decided to have breakfast on the balcony as we sailed slowly into the port of Valencia, Spain. As it is our final port today we will be getting off and exploring. I have been here before, but alas, I was only 8 or 9 years old!

As Sara hadn’t seen Valencia before and I would make the worst excursion guide ever with knowledge gained as a child, I thought best we just book a short excursion. So, we booked one of the ship’s excursions which is a small coach tour, plus a walking tour.

One thing to note, any of the ports that you book a ship excursion on, you can then use your ticket stub on the ship shuttle buses all day long for free if you decide to make your own way back to the port later on or, decide to go back into the city. A little perk that not many people are aware of! (just ask the Shore Excursions team where the shuttle bus will drop of/pick up in the city though!).

Our tour was in French and English, which after a short while you get used to – if it is a good tour guide they usually mix up the languages – ie, explain in English, then French, then the next talk is in French first, then English, etc. Plus, you can always ask them in your own language any questions you may have!

Valencia wasn’t known for its port for many years, in fact, its history does date back to 1483, but because of the excessive flooding, it was never very successful. These days it has become a successful cruise port and has around 5-6 million containers passing through it each year. For years the city of Valencia had the Turia River flowing through it, but after many floods and an especially devastating one in 1957, they diverted the river South of the city forever. The path of the river still lays there and it is now been converted into a 9km long urban park – called the Turia Gardens. It boasts footpaths, leisure and sports areas and is great to walk along – it is crossed by a total of 18 bridges as they kept them from when the river ran under them. The river leads us directly to our first stop!

Our first stop on the coach was to the L’Oceanogràfic (The Oceanographic) which is Europe’s largest oceanarium and dolphinarium – with a combined 42 million litres of water in it! The architecture of the buildings there is stunning and it is split into ten areas. The marine areas include the Mediterranean oceans, Polar oceans, the temperate and tropical seas and the Red Sea.

Seawater is pumped directly to the facility from the shores of Valencia and supports the 500 different species showcased there.

To look around The Oceanographic would take you the best part of the day, so we stopped to take photos of the architecture and the large man-made pools between the buildings before carrying on into the heart of Valencia. The pools serve as a secondary purpose other than decorative. They also work as amazing mirrors which show off the architecture that the city is proud of.

As we continued along we passed the area that I did remember as a child! The Plaza del Ayuntamiento is the home of The Fallas festival. This festival has been held every March, near the start of Spring since possibly the Middle Ages. There is a huge amount of history behind it, but the part that most people are interested in generally happens on March 19th which is called La Cremà (The Burning) where up to 30m high Ninots (Valencian for puppet or doll) are set on fire in front of ten’s of thousands of people! The festival starts on the 1st of March and builds up to a finale week (15-19th March) which is really worth seeing if you can visit Valencia then!

After a short while touring the city streets we stopped and the coach dropped us off. Our guide led us through the ancient city gates (they kept those, but removed the walls, however, they built streets in place of the walls which follow the same path) and she led us down several streets.

The cathedral in Valencia is one of the most visited in Spain. This is because it holds the goblet that was supposedly used in the famous Last Supper. You can see it (behind protected glass) from a distance when you visit. Our tour took us inside and we were given headphones to listen to her explain each area as we walked around (there is usually an admission fee but this was included in the excursion).

After we had toured the cathedral we exited and learnt about the Plaza de la Virgen which is the square right outside.

In the middle of the plaza is a large fountain, called the Turia Fountain (named after the river) it has a large sculpture of Neptune in the middle and is surrounded by eight other smaller statues which represent the canals that took the water to the fields and industries that supported the city.

We continued down several streets until our guide gave us some free time to explore, which of course we did and found a fresh fries shop – which was great for a mid-morning snack for the both of us, followed by a cappuccino at one of the local outdoor cafes.

When we met up with the guide she took us to Mercado Central (The Central Market) – This is a huge (8,000sq metres – one of the biggest in Europe) covered fresh food market that opened in its current form in 1928 (previously there was an open-air one in the same spot from 1839). In here you can buy any type of fish, meat or pretty much anything else. It was really busy when we visited (on a Thursday) and you’ll find it is 99% locals doing their daily or weekly shopping! The sights and smells of the market are something you must experience and the pricing of everything was pretty cheap with a lot of it being produced locally, or at least in the region.

After our market tour, our guide led us again through several streets where we noticed a few more touristy style cafes all selling paella (the birthplace of paella is Valencia after all!) and headed back to our coach.

Within fifteen minutes or so we were back at the port and ready to board MSC Meraviglia again. Once we were back onboard we headed up to the Atmosphere Pool Bar South and had a couple of daiquiris before grabbing a small bite to eat at the Marketplace Buffet and sitting on the rear terrace of the ship.

Ticking off our list of things we wanted to do before leaving the ship tomorrow (insert sad face) we visited Galleria Meraviglia on Deck 6 and checked out first the Jean Philippe Creperie & Gelato Bar. They offer crepes in many different flavours and they make them fresh there and then for you – they also make some lovely desserts – sundaes, smoothies, sorbets and a great range of gelatos. Unfortunately, none of them is included in the all inclusive or deluxe all inclusive packages – but they aren’t very expensive compared to your local high street!

Moving on from the creperie and full of ice-cream we weren’t done just yet! If you’ve not seen any photos of the Jean Philippe Chocolat & Cafe venue yet – you’ve missed out.

In case you weren’t aware, Jean Philippe Maury is a master chocolatier with roots in the past that included a Chocolate Fountain in the Bellagio Hotel in Las Vegas. The fountain carries just under 1,000kgs of melted chocolate over 500 feet through several fountains 24 hours day. This is a sight to see in itself (one that I have done a few years back!). The first partnership that he formed was with MSC Divina, he has now grown this partnership to include a full Chocolat Shop & Cafe with Patisserie on MSC Meraviglia. You can watch the staff create chocolate masterpieces live from flowing chocolate fountains!

You can also design your own special chocolates with messages on, buy chocolates as gifts, drink chocolate, order chocolate desserts (I think you get the idea now?!). We ordered a Chocolate Lava Cake on the recommendation of the staff and sorry to say, but the other nights Chocolate Lava Cake from Butcher’s Cut will now have to come a very close second to this one!!

After picking up a few gifts for family at home (honest!), we headed back to the cabin. A quick call to room service and within five minutes a fresh ice bucket and champagne glasses arrived – we popped in our unopened bottle of Prosecco from the other day and prepared for our final sail away of the voyage!

Leaving the port of Valencia was nice, it is a small port that doesn’t require much navigation to leave, and within ten minutes or so we were back in the Mediterranean Sea heading out before turning left and heading up the coast of Spain. We’ll pass Barcelona later and then start across the bay where France starts and towards our final port of Marseille, where we embarked just a week ago!

We even got to see a distant cousin as the sun set!

For dinner tonight we decided on the Marketplace buffet as we had packed most of our clothes and we still had areas of the ship we wanted to cover in some future guides. The buffet was fairly quiet as it was Gala night and the majority of people were at the main dining rooms or shows. We sat outside with our food by the Atmosphere Pool and the warm Mediterranean Air blew across the deck, it was lovely – complete with a full moon too!

Before heading back to the cabin we visited a few shops and bought more gifts to take home and also check out the Mini-Mart – it is extremely well stocked! From lots of toiletries to medications and plenty of sweets and treats. Technology-wise there are plenty of things like portable speakers, chargers, headphones and other devices and there is a Lego area with sets for sale for kids (or adults!). It is located at the back of the Meraviglia Plaza located on Gallery Meraviglia, Deck 6.

We’ve got 340 nautical miles to sail now and won’t be arriving in Marseille until midday tomorrow – which means we’ve got some more things left to do in the morning and won’t have to leave the ship early, like most disembarkation days – perfect!

Thanks for reading with us so far, it has been a great journey and we’re really pleased you’ve followed along with us. If you’d like to show us a small token of thanks – could you head over to the Wave Awards 2019 website and drop us your vote as Best Cruise Bloggers? One lucky winner could also win a cruise (so it might be a win-win for us both!) It’d certainly mean the world for us! (Pick Chris Hughes – BeyondCruise)

Look out for the next and final update of this trip coming tomorrow! 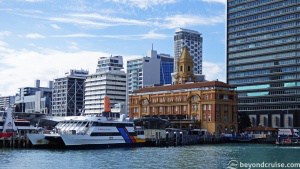