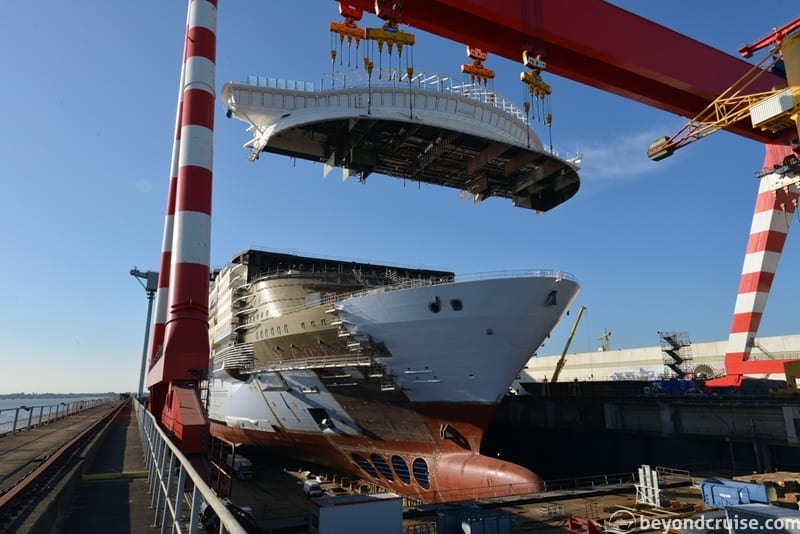 From steel-cutting to maritime traditions

It feels like a new ship is being launched every other month currently, and to be honest, you would be right.

The cruise industry is undergoing explosive growth right now and the thirst for bigger, better and more exciting ships has never been so great!

Everything starts with an order. Although shipyards around the world are pretty busy, we’re not quite at a stage yet where rival cruise lines are buying construction slots “just in case” then selling them as airlines do with planes.

Generally, a shipyard will have several ships being built at the same time, all in various different stages and many ships placed in their order books as either confirmed or as ‘an option’ – which allows the cruise line to cancel or postpone the build if necessary.

It is at this stage that the cruise line will announce they’ve placed an order for a new ship and it is usually around 3-4 years away. No name or any details is given at this stage, just the tonnage, possible class of ship (for example a sister ship or a brand new design) and usually the passenger capacity.

By the time we get to the steel-cutting ceremony, the cruise line is starting to generate some press about their new ship. At this point, the ship is usually given a name publicly, although in some instances she may still only have a build number which is referenced on her hull. The first steel is cut in front of senior management from the cruise line, the shipyard and the press. What you’ll actually see doesn’t really resemble anything but laser-cut steel at this point!

This process continues for months as the shipyard creates lots of pieces of steel all cut into different shapes and sizes which are then welded together to make sections or ‘blocks’.

The next important part of building a ship is the laying of the keel. The keel is the lowest (or bottom) of any ship and will be part of the first block that is lowered by massive cranes into the dry dock or basin as it is sometimes called.

At this point, there is usually a coin laying ceremony. Specially commissioned gold coins are laid in the keel block to symbolise good luck. Sometimes they are welded in and at other times, they are just placed in and then retrieved later on and then used in a mast stepping ceremony, where the coins are welded under the bottom of the main ship’s mast. These days cruise ships don’t have a mast like sailing ships and therefore they are placed under or attached to the very bottom of the radar mast and left on display.

The keel is then laid with exact precision, usually using GPS coordinates which are accurate to the centimetre. We now have (part) of the bottom of the new cruise ship!

As modern ships are now built by block (like Lego!), there is an ongoing process in the shipyard. Engineers will construct new blocks in one area of the shipyard whilst in another area large cranes will lower completed blocks into the dry dock and more engineers will weld together the large sections. These sections can commonly weigh in at 150 tonnes or more with ease.

Eventually, you end up with something on the outside looking like a cruise ship. Although the inside is generally bare at this point apart from structural things like decks and staircases. Temporary lifts will be fitted at the side of the ship and large equipment and more steel will be either lifted or craned onto the ship.  From the outside, your ship will look a familiar shape, but her paintwork will be patchy in places and she may not have any glass or outdoor facilities fitted yet.

As the months progress the ship has her azipods fitted (propellers fitted to large shafts which can rotate 360 degrees allowing the ship to move in any direction) and she is now pretty much waterproof, at least from below.

The Float Out is a large milestone in any ship’s build. At this point, there are 100s of workers working on every area of the ship, sometimes in rolling 24/7 shifts depending on how quick the cruise line wants their ship and how many ships the shipyard has on their order books!

By now, cabins – which are usually made in a factory nearby and prefabricated are literally craned or lifted onto the ship and then slotted in next to each other like jigsaw pieces. The plumbing and wiring are connected to each cabin or “pod” and it is ready to go – just needing bedding and other small furniture items adding!

The ship gets to a point where it is ready to be moved out of the dry dock for the first time. Press are gathered, cruise line management, workers who have helped build the ship and even some local dignitaries may also attend. There is a speech, generally by the Chief Engineer and he gives thanks to the builders and talks about the milestones they completed and then the shipyard and cruise line representatives also give speeches.

Then, the Godmother (still not the official one that will name it!) will smash a bottle of champagne over the bow of the ship and everyone will gather at the rear of the ship as the dry dock is flooded for the first time.

Depending where the ship is being built, other maritime traditions may also take place – commonly a sample of the first water to touch the ship’s hull is collected and kept in a sealed bottle (called an ampoule). It is then presented to the Captain of the ship who will have it on display in his office near the Bridge.

Now the ship is floated out it will be moved to another part of the shipyard for the rest of the fit-out.

The fit-out can usually take months and the ship is usually alongside in the shipyard whilst the next ship to be built is being put together in the drydock. The shipyard operates like a game of chess as ships move in and out of the drydock area and alongside to maximise productivity.

The ship still isn’t complete, glass and various other parts might be visibly missing from the ship. But it is now time to test the ship at sea. Commonly sea trials last from a day to several depending on how complex the ship is, especially if it is a new class. The ship will be loaded with the crew, shipyard officials and also representatives from the insurance companies and also people like the British MCA (Maritime & Coast Agency) who will certify the ship as seaworthy.

The ship will perform various manoeuvres including seeing how quick she can stop, a compass swing (to calibrate the ship’s compasses) and the crew will also get used to how she handles at different speeds. No two cruise ships are generally the same, especially when technology changes at such a fast pace, a ship built just a year later may benefit from better hull design or more efficient engines.

After the sea trials, the ship is brought back alongside or even into a drydock again whilst her internal fit out is completed and her hull and the rest of her external paintwork is completed.

At the handover ceremony, senior representatives from the shipyard, the cruise line and the press are in attendance. At this point, the ship looks like a ship you could board tomorrow – however, it is probably empty of supplies and the majority of the crew will be flying in from all around the world to join the ship for the very first time.

The ship will load some basic supplies and may set sail to its homeport or wherever the naming ceremony is taking place.

This voyage is nothing like a cruise you would want to experience! During this voyage, which may last anywhere from 1-7 days the ship will relocate from the shipyard to its new homeport for the season or where it will be named.

The shakedown voyage will possibly include a full ship. Certainly, all crew will be on board, learning everything about their new workplaces. The passenger cabins may also be occupied with workmen from the shipyard installing and carrying out finishing touches around the ship. Additionally, marketing staff will join the ship at this point and take all those lovely photos and videos of the ship whilst everything is looking brand new and is free of passengers!

Not all cruise lines do this, but some do sell a pre-maiden voyage if the ship is looking like it will be completed earlier than expected.

The inaugural voyage is sometimes for members of the media and travel agents only. It can last anything from 1-3 nights and sometimes it might not even be a full voyage but could just be alongside in the homeport whilst invited guests come to visit and tour the ship.

This ceremony is the final milestone in the ship going to sea and starting its life with paying passengers. A large naming ceremony is very popular, with representatives from the cruise line, shipyard, cruise industry and the media all in attendance. Depending on the cruise line the Godmother might be someone who is famous, Royalty or tradition. It might even be someone who won a competition!

The Godmother blesses the ship and smashes a bottle of champagne across her bow. The tradition goes if the bottle doesn’t break on the first time, it is bad luck!

This is what you all have been waiting for, right? The ship is now ready for paying passengers to enjoy the very first voyage on the ship – in restaurants that haven’t been eaten in and beds that haven’t been slept in! The Maiden Voyage is usually quite special and may actually be a repositioning voyage rather than a normal itinerary. The cruise line may choose to give everyone who travels special commemorative gifts to mark the maiden voyage. This can sometimes be drawn out to a Maiden Season as the ship visits new ports for the very first time on each cruise.

After this, the ship will keep on performing cruises day-in-day-out, without stopping until her next dry dock. Legally the ship must undergo a dry dock for a full hull inspection every five years, at that point cruise lines usually refurbish carpets, cabin materials and sometimes reconfigure bars or restaurants depending on the current trends. Sometimes some ships may perform a dry dock period sooner if the cruise line wants to increase the number of cabins or facilities onboard. 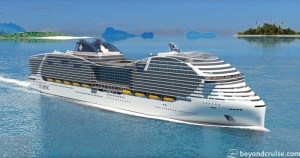 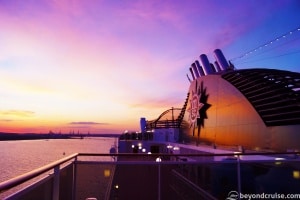