It should come as no surprise that Celebrity EDGE is breaking conventions yet again with its innovative designs, this time it is across their entertainment venues.

Forget a traditional theatre, on Celebrity Edge, expect to be fully immersed in performances as they unfold around you. With four stage areas including one that extends out into the auditorium and a rotating platform that raises almost seven-feet off the stage, entertainment on this ship really has been taken to the edge.

The cruise line has gone to great lengths to develop and utilise the most advanced technology available to break the old on what was thought possible in onboard entertainment. This further includes 2 rotating spiral staircases, 3 gigantic moving projection screens, 10 synchronised panoramic projection screens, 16 video mapping laser projectors, and of course, aerial performance rigging. Guests can be sure to be wowed by not only the performances but the technology used behind the scenes.

The impressive list of hardware is seamlessly brought together by TAIT, one of the world’s leaders in stage automation. This means that the entire stage comes to life on its own to perform precise sequences of rotating stage platforms, dramatic rain curtains, the aforementioned spiralling staircases, flying rigs and the tallest projections screens at sea!

To create world-class productions at sea, Celebrity Cruises and TAIT are also in collaboration with Black Skull Creative, who have had their hand in creating some of the world’s top contemporary shows and experiences including the 2012 London Olympics; and Three in One Entertainment and Consulting, who brought shows like Inferno: The Fire Spectacular to Las Vegas.

Guests will be spoiled for choice amongst the five all-new full productions shows.

This transformative entertainment venue will have guests entertained from day to night.

The host of daytime entertainment includes experiences such as the Funovation Laser Maze Challenge and the Drone Hunting laser obstacle course.

When night falls, guests can enjoy 20’s inspired cocktails at Undercover at The Club – a contemporary Prohibition era-themed venue that features an aerial saxophonist! Perhaps a dance part is more your thing? Guests will be able to try Celebrity’s Hypno Cam Experience, the first of it’s kind at sea, where a high-tech camera is passed around the dance floor to capture photos that are instantly beamed onto the giant LED screen. Or if that’s not different enough, try the futuristic body scanner of Andromeda, which allows guests to morph into someone else for the evening.

Even the Kids Clubs have been given an innovative shake up! With two distinct areas, one for kids and one for teens, younger cruisers will be able to take part in the fully customisable Camp at Sea program with more than 500 activities including the cruise line’s first youth coding experience at sea.

As you may well have guessed, entertainment on Celebrity Edge won’t be confined to select venues and has instead been infused throughout the whole ship.

At the Rooftop Garden, guests will find experiences like the Rooftop Concert Series and the Garden Cinema Series. The next evolution of the cruise line’s Taste of Film experience involves live music performances as guests enjoy films under the stars.

The iconic Eden will see an evolution of entertainment through the day as the space changes between a relaxing escape in the morning to playful in the afternoons and sinful at night. Guests will be able to enjoy performances from sitar players to aerialists or partake in Meditation at Eden during the day. In the evenings, Eve at Eden begins. Celebrity in partnership with Variety Worldwide, this theatrical journey promises to indulge all of your senses and put each audience member at the centre of the experience for a fusion of culinary experimentation, performance art and nightlife – like nothing you’ve ever experienced at sea, or on land. 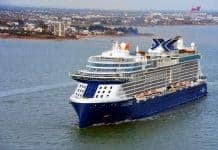 Celebrity Apex will launch from Southampton in 2020