The 143,700 GRT 3,660-passenger cruise ship had a float out ceremony at the Fincantieri shipyard in Monfalcone, Italy.

The ship will undergo her now drydock fit-out and is due to launch her Maiden Season from Southampton on June 30 next year.

The next ship Princess Cruises’ will launch is Sky Princess which just completed her sea trials in the last fortnight. 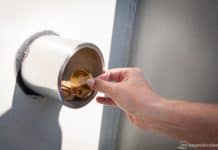