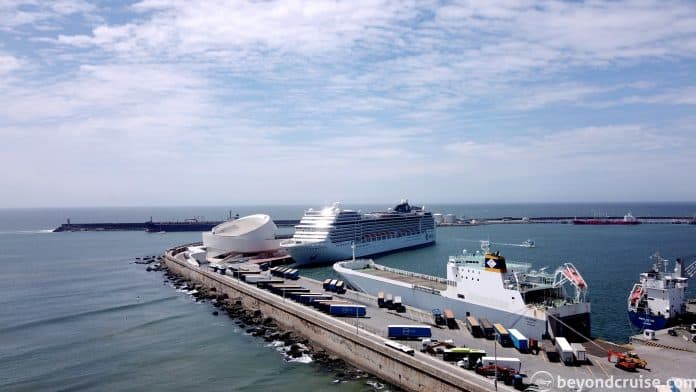 Our first stop in Portugal

As we have never actually been to Portugal, we were really looking forward to today (and tomorrow – Lisbon!) – after a fairly calm morning sail, we were due into the port of Leixões today, which is just 25 mins by car from the city of Porto. The port itself is located in Matosinhos, famous for fishing.

We awoke early and went for breakfast in the L’edera dining room instead of the Sahara Buffet. We were placed on a table for two near one of the oversized portholes and enjoyed an MSC Express Breakfast (read: Full English) and Eggs Benedict. The service in the dining room was friendly and courteous and it was nice to see the difference between our dining room and this one, a deck below. I think I prefer this one as all the chair backs aren’t so high, therefore the restaurant seems more open and spacious.

After breakfast, we hurried back to the cabin and grabbed our equipment to film and photograph our arrival into Leixoes from Deck 11 forward. Having not been into this port before, I wasn’t really sure exactly where we’d berth. There was already an AIDA cruise ship in the far back of the port and we slowly crept in, turned starboard 90-degrees and came alongside our berth – right next to the Porto Cruise Terminal. The ship tied up its lines and the passenger bridge was extended to the ship – just like at an airport.

The cruise terminal is a modern building which is just under three years old – it is like a piece of art itself, delicately placed right at the end of one of the harbour walls that protect the small port from the storms of the North Atlantic.

The building itself is a joy to explore, there is modern art, sculptures, a rooftop viewing platform and in a great partnership, the top two floors belong to the Science and Technology Park of the Sea of the University of Porto. As you walk up the spiral walkway through the building you can see all the research offices and labs through their floor to ceiling glass walls.

Out on the roof terrace of the terminal building you can enjoy panoramic views of Portugal’s coast for miles – it is a must-see for anyone visiting the port. There is a lift in the building for those that don’t fancy the climb up or down. Additionally, there is also a gift shop in the terminal.

There are various options available to you to explore this port. If you want to explore it yourself, you must use the Port Shuttle Bus (free) that takes you directly from the port terminal to the entrance of the port. This is for security and safety reasons, with it being a working port. The transport is provided by the local port and is usually every 5-10mins. The journey is no more than 2mins.

MSC Cruises offer a shuttle of their own, again directly from the port terminal and this takes you straight into Porto (around 8km) and costs 12.90 EUR return for an adult and 9.90 EUR return for a child. Tickets are left on your bed the evening before arrival and if you wish to take advantage of the shuttle you simply fill out the number required and bring the ticket with you to the shuttle. Your onboard account is then charged that evening if you don’t use them – then no charge.

Additional to the MSC Cruises shuttle, there is public transport in the form of buses that call very near the port entrance and you can also get on the familiar Hop On-Hop Off Red Buses and Yellow Buses – they are roughly 15 EUR each for the day and run a circular route around Porto and the surrounding area.

As it was our first time exploring the port we decided to get the port shuttle from the terminal. It drops you off next to the Porto Tourist Information building, in here you can find plenty of leaflets on local activities and people to guide you if needed. Next to the building is Matosinhos Beach, a lovely golden sand beach that stretches for miles. It is tidal, so check the times in advance before you arrive. Dotted along the beach are many fish restaurants with outdoor seating.

We headed to the beach to get some shots of MSC Magnifica in the port and some panoramic views of Matosinhos. Unfortunately, although it was quite warm (21c) it was quite gusty at times, so we only flew the drone for a short while over the sea. Matosinhos beach is well known for surfing, but today there was only a couple of people out enjoying the waves.

After the beach, we decided we would walk into Porto as we wanted to look at the surrounding area and it always nice to stretch your legs after a day at sea. As you head to the end of Matosinhos Beach you come across a massive 160-foot tall sculpture called She Changes. The sculpture, known locally as anémona is comprised of a 20-ton steel ring and a net structure of various different colours. It symbolises the history of Matosinhos’s fishermen and history of the area. As the wind blows, the membrane structure moves effortlessly with it. It is quite mesmerising to watch.

From there we headed to Porto. Some of the walk is along a fairly busy road, but there are lots of small roads with tiny cafes on if you plan your route in advance. When we arrived in Porto around an hour later we saw the monument to the Heroes of the Peninsular War – a large column statue surrounded by parks in the middle of a busy roundabout in the city. The monument celebrates the Portuguese and British victory against the French forces of Napoleon during the 1808-1814 Peninsular War.

By now we were getting hungry, so we looked for the nearest cafe. Porto is well known for its pastries and within a few minutes we had found a cafe full of locals (good sign) and chose a few pastries. The bill was only 5 EUR (including tip), it certainly isn’t very expensive here.

Next, we decided to take a walk down to the River Douro. We headed down some steep roads for about 15 minutes and ended up on the banks of the river. The river is extremely wide and offers pleasure cruises, helicopter rides – excursions that can be booked with MSC Cruises. It is paved along one side for you to walk the entire length of it in the city. On the opposite side are the caves that famously store the Porto Port in them. For centuries, merchants use to sail down the river and store the port barrels in the caves until they wanted to sell them.

Additional to the road that runs alongside it is a tram route. The electric tram here is one of the oldest in Europe, dating back to 1872. It is extremely popular with tourists and it has to stop often to allow residents to cross the line to park their cars in their drives! You’ll find the trams run in both directions every 20-30 minutes. However, they are very popular and some are quite crowded. It is not recommended to be used as public transport on the basis that you can’t always get on one! We walked down the side of the river and underneath the impressive ArraBida Bridge. The concrete bridge spans 270m across the river and was the longest of its type in the world when it was opened in 1963.

After walking along the river for around thirty minutes we decided to head back to the port. We called an Uber and for around 8 EUR we were back at the port entrance. Now, a little tip for those that like fresh seafood. If you leave the port entrance and turn immediately left, you find a road that is full of seafood restaurants. Each restaurant has what appears at first, as a strange metal/glass huge box outside it. This serves two purposes – one it is airconditioned and secondly, at the back of each of these boxes is a huge charcoal grill where your seafood is cooked to order. The seafood is fresh from the port that day. As you walk down the street the smells of each restaurant cooking in the street fill the air. Local restauranters beckon you in (not forcefully mind!) and it is a real pleasure to experience.

Unfortunately, we didn’t have time to sample the delicacies available and had to head back to the ship to finish off some footage. We travelled on the 2-minute port shuttle and then walked up the spiral ramp of the port terminal building. Here, on the roof, we had fantastic views across Matosinhos Beach and the city of Porto as the sun was starting to set.

As we were departing at 8.30pm, we decided to eat in the Sahara buffet again! We had a quick meal and then sat out on the terrace ready for the sail away. The winds have picked up quite significantly now, to the point that we are going to use two tugs to pull us backwards and away from our berth and allow us to then sail straight ahead and out to sea. We filmed the sail away as the sun set and watched as all the lights in the port and city grew steadily smaller. Within 100m or so of us leaving the harbour wall, the ship started to roll side to side in the Atlantic Ocean swells.

We are now travelling just 234 nautical miles to Lisbon and will arrive by around 9am tomorrow after passing under the 25 de Abril bridge on the River Tagus.